Palau tilted away from North to maximize the picture 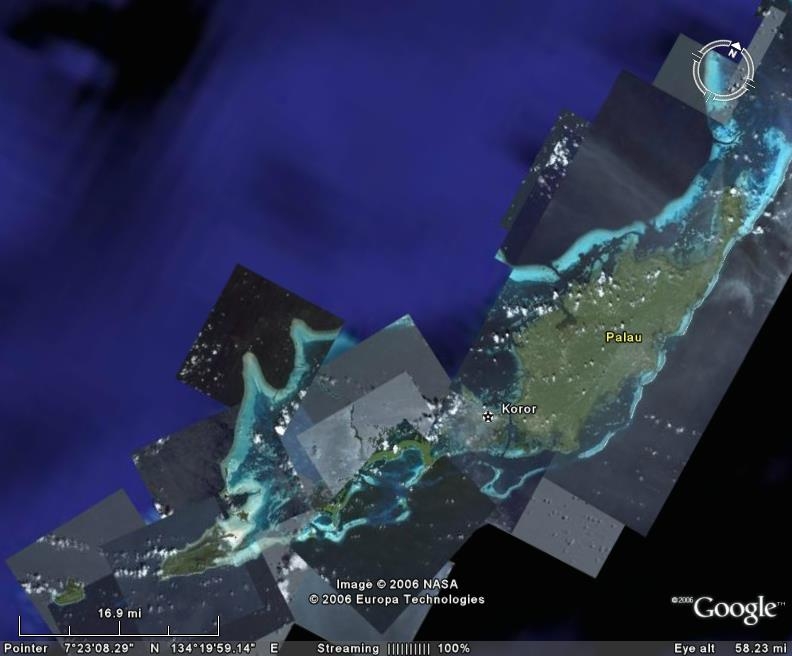 Below is the picture above broken into important segments, roughly as they would be above from the southern end of Babeldaob and northern Koror islands in the first pic below to Angaur Island as the last and farthest south of the main body of Palauan Islands. Peleliu and Angaur Islands were the target of major US landings in World War II. These landings did not go as the 'turkey shoot' naval battle on the 30 and 31 of march in 1944. The battle was forecast to take only several days with minimal losses. It took several months and we sustained the greatest losses the United States has ever taken in battle. The Japanese withstood intense shelling buy our Battleships and Destroyers by living in caves and tunnels until our troops hit the beaches. Naval commanders cancelled the third day of pre invasion shelling as they thought every living thing on the islands had been killed.

Picture #1 above is the Saies Complex with Saies Corner, Saies Cave or Tunnel and Ulong Channel.

Picture #3 has many of the dive sites including the WW-II shipwrecks Sata, Iro Nagisan, Kamakazi, Bishu, Unidentified #7 (from Dan bailey's Book) all Maru ships. There is a Fighter aircraft (Zero) to the right on a bad reef, Soft Coral Arch and Ngerchong, Ngermeaus Islands. Most are around Urukthapel Island. Short Droppoff, JellyFish Lake and Cemetery Reef are shown. Little Toi is the break in the islands where most of the dive boats go to get outside the reef.

Picture #4 Has the Hafadeiat the bottom, PPR at the top and the Helmet Shipwreck to the right. There are two long islands running to the left forming a top and bottom of the protected harbor. The Ryuko, and LST are on one side (North) and Amatsu and Choyo are on the other (South) of Nagarcol Island. The Urakami is in mid harbor. The Amatsu, Chuyo, Urakami and Ryuko are WW-II shipwrecks. PPR's pure white beach can be seen running vertically at the top of the picture.

For a larger picture click on Picture to enlarge